Eater of Dreams (Sacred Guardian series #2) by J.A. Jaken Sequel to Through the Last Door Novel (122,000 words) Genre(s): M/M Romance, Fantasy, Adventure Kaori Sansa has uncovered the truth about Shinja, the Sacred Guardian of Kazure, but the country he is sworn to protect is far from secure. War presses hard from the east, and unrest from within Kazure's borders threatens to undermine what little control he has managed to gain over his subjects. Furthermore, there are those who question his choice in pursuing a relationship with Hunter--quite possibly even those who are closest to him, and whom he has most come to depend upon. Will he find a way to sort through the miasma of lies, violence, and political entanglements that surround him in order to save the country he loves, yet somehow remain true to his own heart? >> READ A FREE PREVIEW 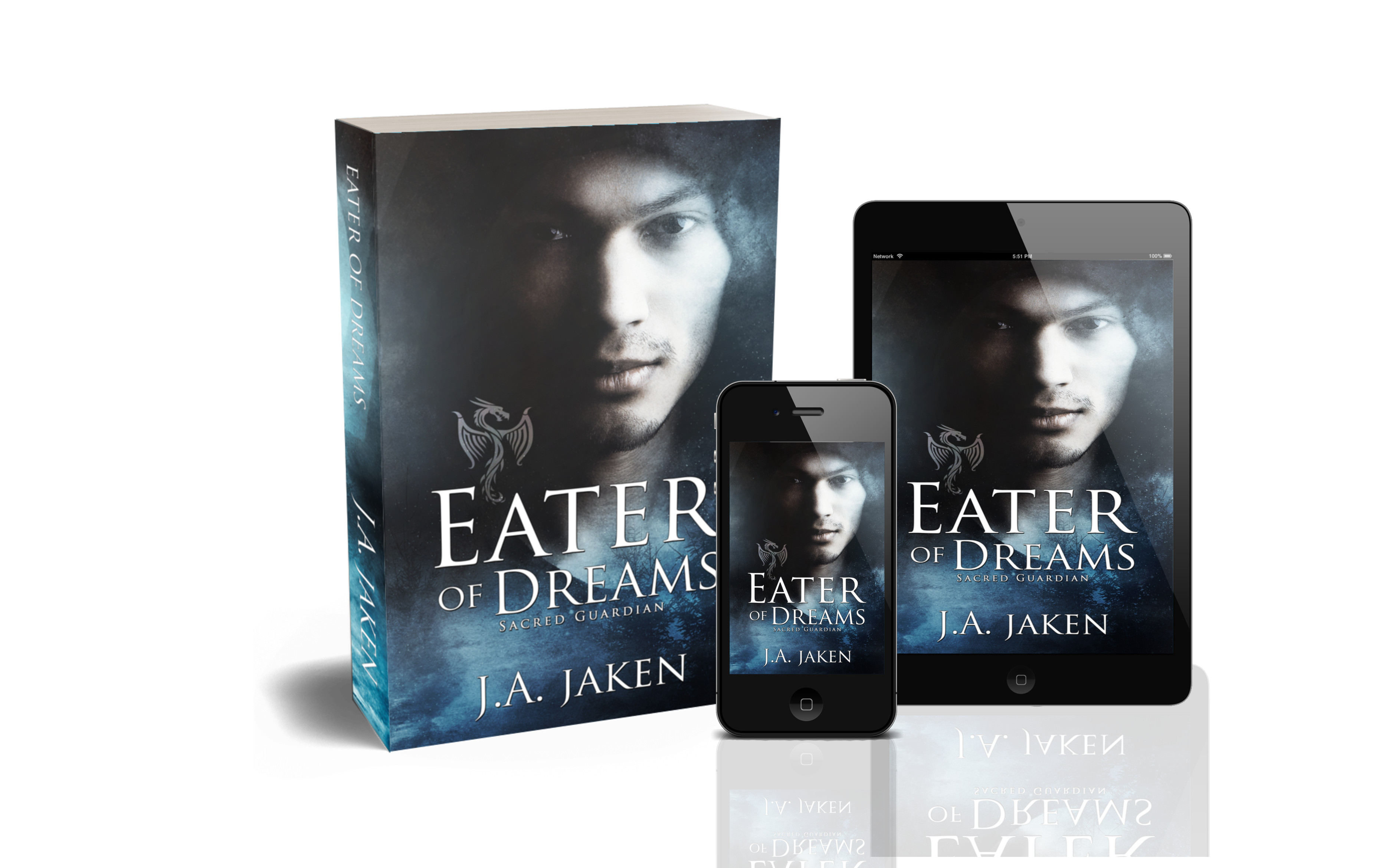 Here is what readers are saying about Eater of Dreams:

"The engaging characters in this series continue to be the driving force behind the story's success and enjoyment. [...] I really really hope there's another book in the works for this series!"

"Jaken continues a bold and creative fantasy series with this second book in the Sacred Guardian universe."

"I loved it! I won’t spoil more than the blurb already does, but I’ll say that following Kaori’s journey through Kazure, watching him grow both as a ruler and as a partner to Hunter was great fun."

"Eater of Dreams was a great sequel to Through the Last Door. Every detail, even Shinja reveals more secrets."

"If you’re a fan of gay fantasy, then you should definitely try this series!"

Here is an excerpt from Eater of Dreams :

It was nearing evening when they came across a booth at one side of the concourse, half-covered by a concealing backdrop of thick velvet drapery. Ben was currently distracted by a nearby vendor selling herbs and local healing poultices; Kaori left him to his browsing and wandered curiously toward the booth to see what its wares might be.

Ari stood watch on the street outside while Hunter and Kaori ducked their heads low to enter. The interior of the tent was dim and smoky, and smelled strongly of incense. The floor was covered with a profusion of colorful pillows and blankets, although the decorations did little to lighten the oppressive atmosphere of the room.

Tucked in a back corner of the tent was an old woman, sitting on a wooden chair. She was dressed in a patched robe, with a gnarled walking cane leaning against the wall of the booth beside her. She appeared to be blind in one eye.

"Ah," she said in a voice that sounded as if it got little use on a day to day basis. The softly grating rasp of it made Kaori wince. "You've come to visit with Madam Malka, have you? Come to have your fortunes told?"

Kaori regarded her curiously. The old woman was apparently a Seer. There was some debate in Kazure about whether Seers were true practitioners of the magical arts or merely charlatans; it was true that foretelling was not a facet of the art taught at any of the universities. However, there were those who swore on the graves of their ancestors that they'd had an experience with a Seer who foretold their future accurately, who passed along the words of a departed loved one or helped them find a family heirloom that had been irretrievably lost. Kaori himself had never had any personal experience with them, and thus had never formed much of an opinion about them one way or the other.

He figured it couldn't hurt to play along in this case, just for fun. He was in high spirits after the afternoon spent at the carnival, and was in a particularly indulgent mood.

"Yes," he responded. "What fortunes do you have to tell?"

He glanced at Hunter, who obediently took a coin from the purse at his belt and handed it to the old woman. Her long, crooked fingers snatched hold of the coin with surprising deftness, and both coin and hand disappeared beneath the folds of her robe.

"Come," she said, gesturing with the other bent hand. "Sit. Listen to what Madam Malka has to say to you."

Kaori arranged himself cross-legged on the blankets in front of her chair, while Hunter knelt gracefully down beside him. He could feel the old woman's gaze resting heavily on him, evaluating his every move.

"You," she said to him once he had settled, "have come a long way to visit us, my young lord. A traveler, you are."

Kaori smiled at her. Most anyone could have figured out he wasn't a native of this village. "Go on."

"There are three parts to the reading, young master. Past, present, and future." Reaching toward a low shelf beside her, she picked up two shallow wooden bowls filled with what looked like bird's bones. "Here," she said, handing a bowl to each of them. "let us see what your destinies offer you."

Kaori glanced at Hunter and shrugged. Giving his bowl a rough shake, he spilled the contents out over the blanket in front of him. After a moment's hesitation, Hunter followed suit.

"Ah," the old woman said again, leaning forward in her chair. She reached down to poke a finger at some of the bones in front of Kaori's knees, being careful not to disturb them. "What I see here is a relatively unremarkable childhood. A father notable mainly for his absences. A mother who loved you. A bit more loneliness than the average child faces. But memories of happiness, for all of that."

Kaori chewed on his lower lip, feeling reluctantly impressed with the observations. Those kinds of vague proclamations could have applied to almost anyone, he was sure, but the fact that they described him so accurately was rather eerie.

"And you," she said, turning toward the bones in front of Hunter's knees. Her face creased suddenly with an expression of sorrow. "I see pain in your childhood, and the memory of loss. Yours was not an easy passage into adulthood."

"And your present...it is one of service, and duty, and love. And atonement. Still, you seek to make reparations for the sins you see in your past."

Kaori gave Hunter a hard look, but Hunter wasn't looking at him.

"And you, my young lord." The crone's voice had a faint edge of amusement to it as she turned back to Kaori. "You see yourself as diligent, but not particularly strong. You carry such a weight of responsibility on your shoulders. The challenge before you is to remember that you do not have to carry those burdens alone. You must learn to rely on those who stand beneath you, even if it means risking the loss of them."

Kaori's mouth tightened. "I'm no more important than anyone under my command."

"Oh, but you are." Her mouth curled slightly. "I sense the winds of change about you, lordling. You carry a powerful destiny within you, a purity of purpose, that shines from within you like a star. It is most curious." Her eyes narrowed, sweeping over his face with disturbing intensity. "Have a care that you do not falter under the weight of that destiny." Then her gaze returned to the bones, and she brushed a fingertip over a particularly ugly, gnarled-looking one. "The consequences of failure in the course you've set before yourself are dire. This tells me that once you reach the end of this road, you will give in to your fear and fail the ones you care about most in order to save yourself."

Hunter shook his head, his mouth pressing together in a hard line. "That's not possible. He would never do that."

The crone's head lifted to fix on him, the milky gaze of her blind eye giving her a disturbingly predatory expression. "And you, famed hunter of the dark though you may be...if you fail to conquer the demons within you, you will end up leaving this one alone in the darkness to die."

The expression of shock on Hunter's face pierced Kaori's chest like a blade. Shaking, he reached for Hunter's hand and pulled them both to their feet. "I think we've heard enough," he said, embarrassed by the sharp edge of anger in the words. Why was he taking this so seriously?

The woman leaned back in her chair again, regarding them both with a narrow-eyed expression that looked almost pitying. The shadows at that corner of the room swept forward to enclose her, claiming her as their own.

Her voice followed them as they fled out through the door. "You are doom-driven, High Lord. Make sure you do not fall into the trap your destiny has set for you." 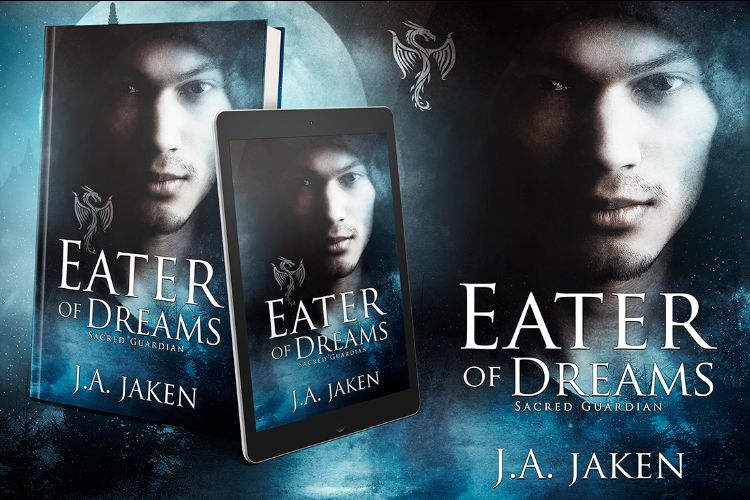