Nicholi's Vengeance by J.A. Jaken Novel (110,000 words) Genre(s): M/M, Dark Fantasy, Slavefic Trigger warning: rape/noncon Nicholi’s world goes up in flames when soldiers invade his country, leaving chaos in their wake. Captured and enslaved in a foreign land, Nicholi struggles to cope with the nightmare of slavery and adapt to the terrifying and inexplicable world he is thrust into. He draws courage from a steadfast determination to get justice for his murdered family and—he hopes—peace to himself by finding and killing the man responsible for the destruction of his village. Yet through it all, Nicholi’s greatest enemy might not be foreign powers or enemy soldiers, or even in the self-serving machinations of his fellow slaves, but himself.

Nicholi's Vengeance is an All Romance Ebooks Best Seller! >> READ A FREE PREVIEW 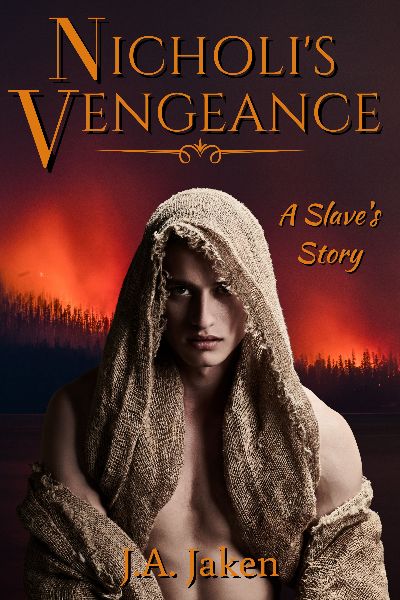 Here is what readers are saying about Nicholi's Vengeance:

"Nicholi's Vengeance is a world-spanning, epic tale of courage, vengeance, and sacrifice with a varied cast of richly drawn characters...which, at its heart, satisfied my itch for m/m slavefic every step of the way." "As the story progresses, the clearly defined villain becomes a bit less clear, raising the question of who is really the bigger offender in the enslavement of others: the individual directly responsible, or the society that allows it to be done." "This story veers away from the typical rescuer-romance tropes, instead presenting a variety of counterparts that have their own flaws, desires, and problems to deal with. The supporting characters really drew me in; they seemed so real and lifelike. The lines blur between good and bad, slave and free, desired and feared." "I just finished reading this book for the second time. It's wonderful to find a book that can actually make you be emotionally involved with characters that have many levels to their personalities (just like real people!)" "I'm glad to say the story here was solid with very likeable characters who were easy to relate to. I was rooting for Nicki the whole time." "I really liked this story, it has it all: love, hate, vengeance, captivity, war, slave, master, and an incredible story that should not be missed. Enjoy the ride!!" "This hooked me from the first chapter. If you're a fan of slavefic, this is one you won't want to miss!"

Here is an excerpt from Nicholi's Vengeance:

Dear Goddess in heaven, protect me.

Nicholi Savenko ran breathlessly into the darkness of the predawn wood, throwing himself into the fog without a care for where his feet would take him. Sharp-needled branches swiped at his face in passing, catching like grasping fingers in the folds of his clothes. He ducked his head away in instinctive defense as he plunged forward into their stinging embrace.

He could hear the hounds braying somewhere behind him, their voices a fell harmony rising wraith-like out of the fog. He quickened his pace, his heartbeat thundering. Panic pounded through him as he fought to outdistance his pursuers, even as he knew in his heart that it was useless. They were closing on him from two sides now, and he was tiring rapidly. Even so, he could not bring himself to simply lie down and accept his fate.

The memory of lurid orange flames sprang unbidden to his mind. He choked back the sting of tears as he ran, fighting the wave of hatred and pure animal rage that rose in him. The tears cooled instantly on his cheeks, reminding him of his helplessness, his desperation, as his mind painted images of blood and terror, the rough laughter of the invading soldiers, the terror-stricken cries of his mother and sisters as their home was set ablaze....

No, I don't want to remember.

He cried out sharply as his boot caught in a tangle of underbrush, and he pitched forward with a low grunt of pain as his palms caught his full weight against the ground, his long hair stinging as it flew haphazardly into his face. Without pausing to acknowledge the small hurt, he clawed his way back to his feet and fell forward against the tree that loomed in front of him, numbed by terror and rage and exhaustion.

This part of the wood was dominated by towering firs. The spicy scent of them tickled his nostrils as he gasped for breath, his chest burning. Frantic, he cast a glance over his shoulder. His heart leapt as he heard the enthusiastic cries of the dogs that hunted him, unleashed to track him through the slowly dissolving fog. Too close, they were too close, and now he could hear the echoing calls of the soldiers who rode after them.

Nicki heaved a shuddering sigh and closed his eyes, leaning his weight against the trunk of the tree. The bark felt rough against his cheek; he rubbed his face slowly against its harsh contour, welcoming the pain. A part of him seriously considered simply lying down and letting the hounds fall upon him. It didn't even matter that they would rend him limb from limb when they found him, maddened by the thrill of the hunt and the encouraging calls of their handlers. Anything to bring an end to the fear, to the pain that shattered through him with every breath he took, bringing with it the sickening memory of vermilion flame....

Before he realized that he meant to move, his hand was groping above him for the sturdy branch he sensed hovering just over his head. Apparently his body had its own ideas about whether it wanted to survive, regardless of the chaotic state of his mind. He pulled himself upward with a ragged gasp of effort, shivering as his boots scrabbled for purchase against the trunk. Balancing precariously on the outstretched limb, he steadied himself against the shaft of the tree with one hand and shrank back as far into the clinging shadows as he could. He was unable to control the violent tremors that shook their way through him. He huddled in on himself, squeezing his eyes tightly shut as he willed the nightmare around him to dissipate.

It took even less time than he expected for them to find him. The night was pierced by a cacophony of enraged growls as the hounds burst into the clearing beneath him, and he drew back involuntarily as they leaped at him, a nightmarish tapestry of bright eyes and slavering jaws and huge, shaggy bodies. He clung to the tree's branches desperately, terrified of falling, as the more aggressive of the animals nearly reached his fragile perch, their thick claws digging deep runnels in the bark of the tree.

A jingle of harness tore his gaze away from the attacking dogs, and Nicholi's insides turned to ice water as he recognized the man who had led the raid into his village. He froze, the hatred rising up in him again, accompanied this time by a bitter, helpless rage. He swayed, clutching white-knuckled at the branches around him.

"What a merry chase," the soldier said appreciatively, dark eyes bright in the darkness as he gazed up at his captive prey. His accent was thick, the consonants hard with a strange rasp at the end of them that Nicki didn't recognize. He was a large man, unshaven, with the air of a professional fighter about him. His dull armor gleamed in the moonlight that filtered down through the branches of the trees, and his face looked pale in the darkness, a watery oval with charry circles for eyes hanging suspended above the darkness of his uniform. His men had called him Taric as they followed his order to burn Nicholi's home; a name or a rank, he had no way to know which. The word blazed with fearsome intensity through Nicholi's mind.

Nicholi watched through slitted eyes as Taric drew his horse up sharply, circling with languid grace beneath the tree. His gaze never left Nicki's perch; the look in his eyes made Nicki's skin itch. He knew what these men must want from him, what would happen to him if he fell into their hands. Bitterly, he cursed himself for giving up the chance to find an easy death at the jaws of the dogs.

"It's over, boy." Taric's voice was unexpectedly gentle as he held Nicki's gaze. He paid no mind to the other riders who appeared in the clearing behind him, crudely shouting their triumph back and forth to each other as they spotted their captive.

Nicholi met that hard gaze unflinchingly, knowing in his heart that there was still a choice for him to make. It was defiance that had caused these men to pass sentence on his village, defiance that had provoked the rain of fire and terror and murder to fall upon them, searing away all who dared stand before its fury. It was a lesson Nicki had learned well -- defiance was the equivalent of death. Painful death, perhaps, or degrading death, as his body and mind were raped for the pleasure of his conquerors, but in the end, it would still be death. The thought was chillingly soothing as he considered it.

But as he held that hard gaze, the gaze that waited patiently for him to make his choice, he felt again the wave of intense hatred and fury that had sustained him throughout the long night. He realized abruptly that it was death he wanted, but not his own. What he wanted was for this man to die, cut down in payment for the loss of Nicki's village, his home. The surge of blood-lust terrified him, even as it filled him with a dark, forbidden thrill. The focus of his entire world narrowed to this one man, and the atrocities he had committed.

A choice, then. A decision to survive, no matter what the cost, so that someday, he would be able to return the pain that this man had inflicted on him and his family 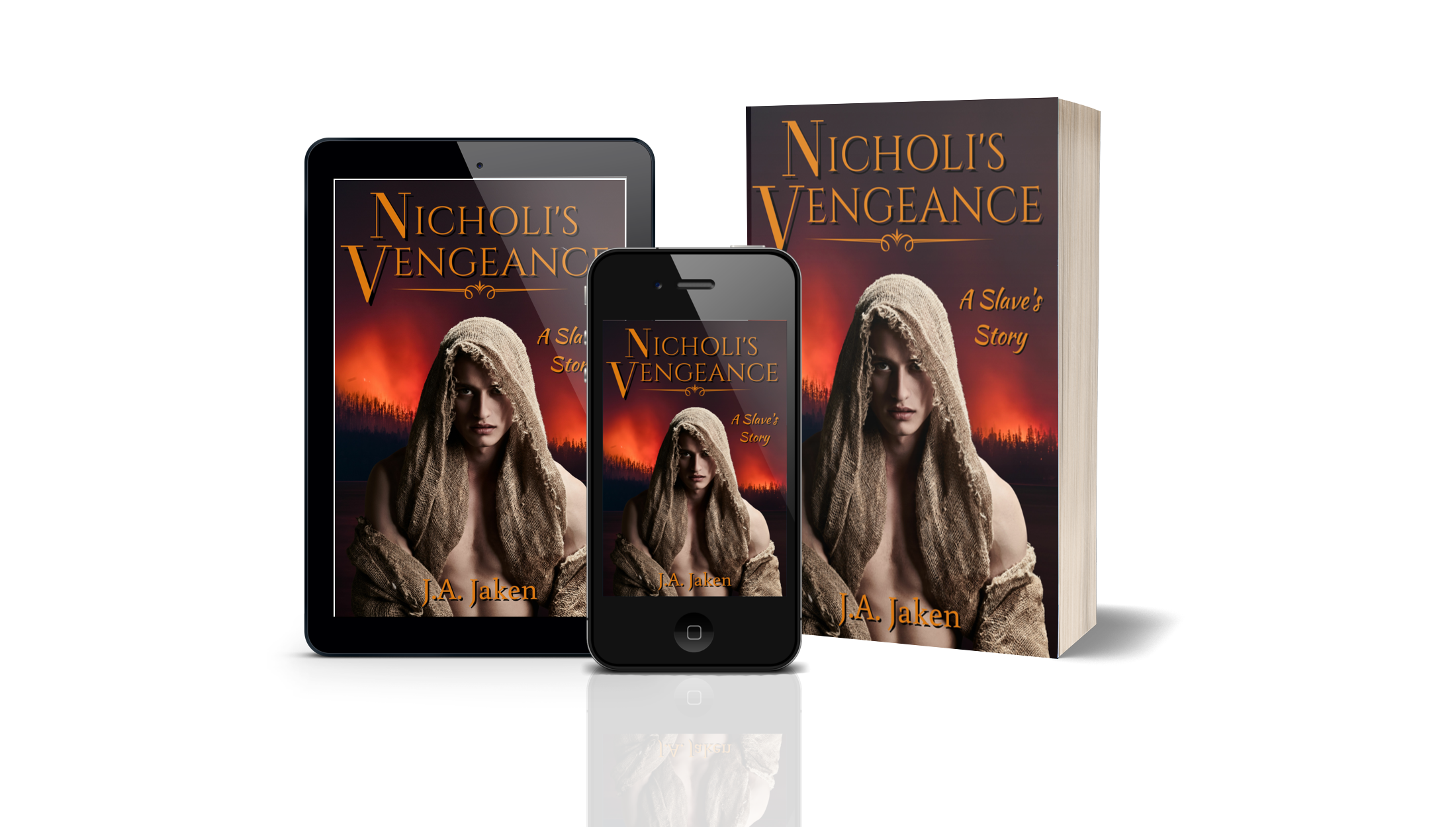