Dancing the Knife's Edge (Sacred Guardian series #4) by J.A. Jaken Sequel to Through the Last Door, Eater of Dreams, and The Soul Forge Novel (114,000 words) Genre(s): M/M Romance, Fantasy, Adventure It has been over a year since Kaori took the throne, and he and Hunter are at last ready to become married under Kazurian law. However, a brutal attack against Hunter just days before the wedding suggests that not all of Kazure is in favor of the alliance. Kaori goes on a desperate quest to save Hunter's life even as a new enemy arises, slaughtering the priests and priestesses inside the Summer Temple for unknown reasons. Finding a solution to these two mysteries will determine whether or not Hunter manages to survive, and if the kingdom of Kazure will continue to exist at all. >> READ A FREE PREVIEW 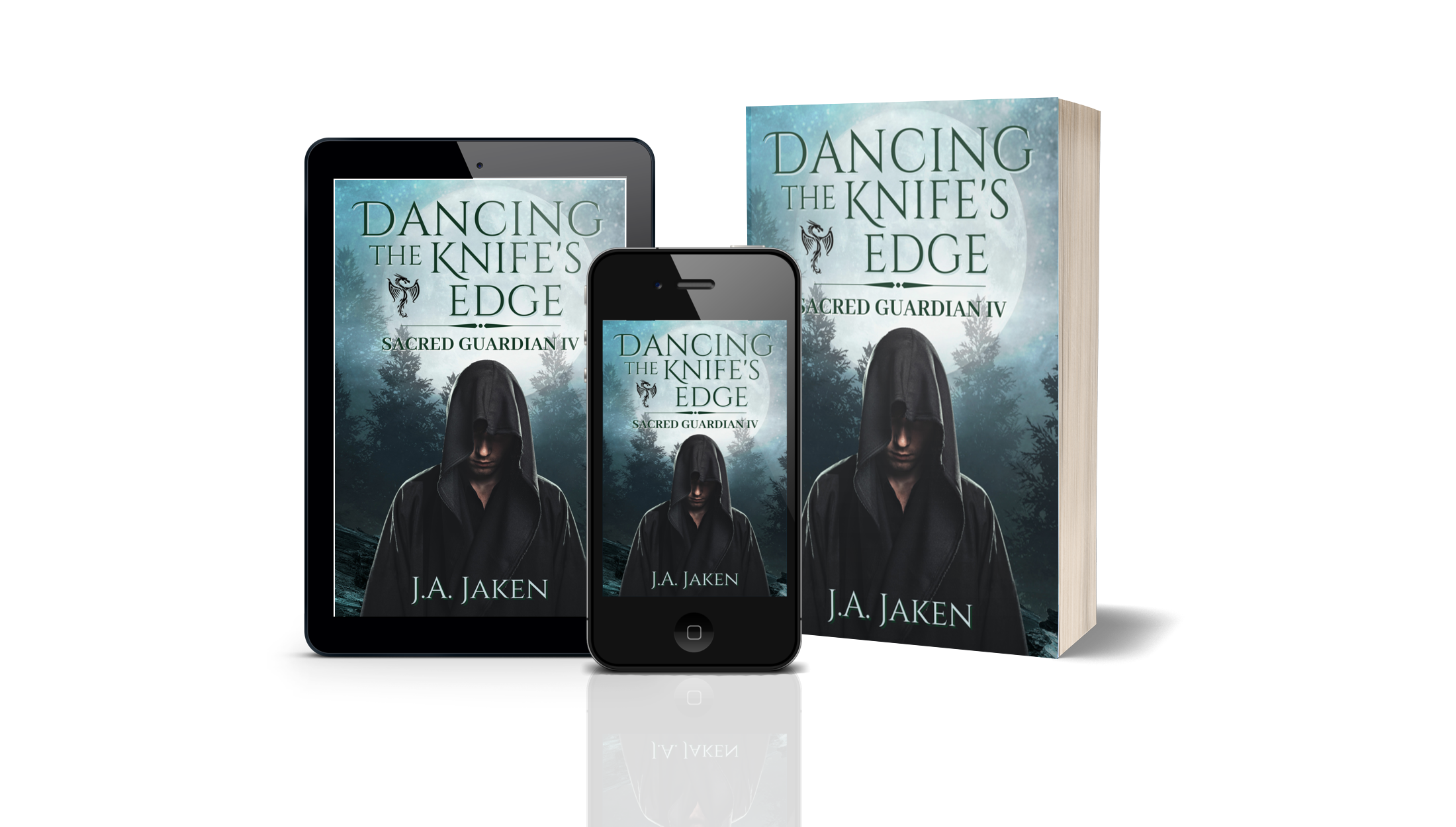 Here is an excerpt from Dancing the Knife's Edge :

Hunter watched his opponent carefully, coolly assessing, and waited for him to make the next move.  The soldier gave in to impatience finally and moved in to strike at him again, the blade of his sword flashing in the sunlight.  Hunter moved in a smooth sidestep to avoid the blow and darted in low, reaching up to disarm him.   The two of them grappled for a tense moment, their feet kicking up a fine cloud of dust in the dirt of the field.  Then the soldier struck Hunter hard across the side of the face with one mailed fist, making him stagger.  A final hard swipe of his blade sent Hunter's sword flying from his grip to land clattering on the ground.   "Point!" the arbitrator's voice rang out over the suddenly deafening roar of the crowd.  "To Uruma."   Kaori was moving before the echo of the words had faded, ducking underneath the fence and running at full speed across the field.  He felt cold, his chest tight.  His mind struggled to process the reflexive shock that gripped him.   Hunter had lost the match.   How was that even possible?   He skidded to a stop at Hunter's side, reaching up a hand to touch the scrape bleeding freely down the side of his lover's face.  Had it really been necessary to hit him so damned hard?   "Hunter," he said, breathing heavily.  "Are you all right?"   "I'm fine, Kaori," Hunter told him.  The words were thick.   Kaori glared at him, his heart pounding.  "What the hell happened?"   Hunter shook his head, looking lost.  He closed his eyes when Malo ran up and threw his arms around his waist, Rin following swiftly behind him.  The older boy's expression was both fierce and possessive as he glared at the soldier who had dared to defeat their father.   "Kaori?" Ben said in concern, stepping up behind them.  Kaori gave him a helpless look, placing a restraining hand on Malo's shoulder.   "I'm sorry, High Lord," the soldier from Uruma said, sounding wretched.  Clearly, he regretted having bested his High Lord's future husband, now that the battle was won.   Kaori waved the apology away dismissively; he didn't care about a stupid contest.  His chest tightened even further as he took a step closer to Hunter and peered into his fiance's face.  "Hunter," he said again, urgently.  "You're not all right."   Hunter didn't contradict him.  His hand settled on Malo's head as if seeking to comfort the boy, while his other hand clutched at Kaori's sleeve.   "Kaori," he whispered.   Then he swayed once and fell bonelessly to the ground as unconsciousness claimed him.