The Charming by J.A. Jaken Novel (51,000 words) Genre(s): M/M, Contemporary, Paranormal, Thriller The shadow of a past love has blinded Clayton MacAllister until his life is slipping through his fingers. Just as Clay is ready to give up on the idea that he might ever be happy, a charming stranger steps into his life and changes everything. Mal is rich, handsome and seductive; everything Clay thought he couldn’t have and didn’t deserve. Mal’s sadistic desires make Clay more than a little uneasy, but it seems like a price he can pay—until he learns the price might be his very soul.

The Charming is an All Romance Ebooks Best Seller! >> READ A FREE PREVIEW 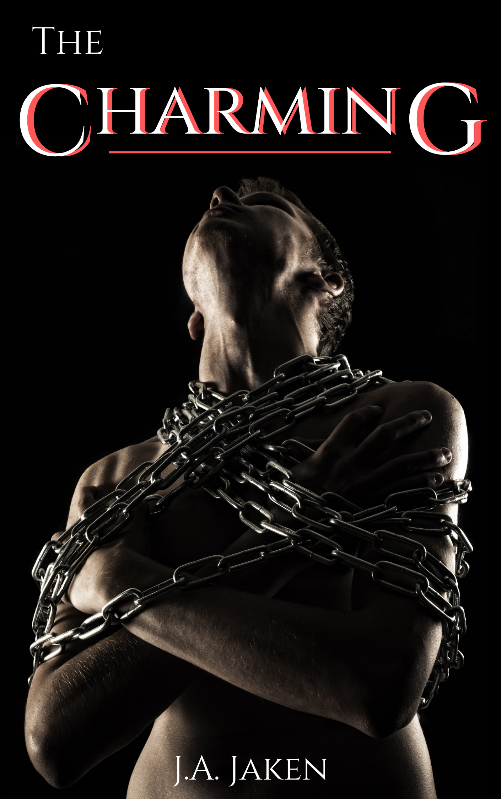 Free to read on Kindle Unlimited!

Here is what readers are saying about The Charming:

"So much of this story hit all the right spots for me. I loved reading about the devious nature of Mal's relationship with Clayton. I loved the gradual build of debauchery that Clayton is slowly forced into." "This story draws you into a world where a man’s pleasure overshadows his unease, where he will endure discomfort and fear for the eventual blissful release of orgasm, and when he eventually does begin to question his reactions, he begins to see the truth, but it could be too late." -Goodreads Reviews

Here is an excerpt from The Charming:

Clay ran a hand back through his hair. "Look, I don't mean to be rude or anything, but why all this interest in me? I mean, I'm... I mean I'm not...." He trailed off, his face heating. Mal's eyes crinkled at the corners. "To be honest, I'm not exactly sure. Something about you just seemed really sad right now... and it called to me." Clay considered that. Had it really been that obvious that he was sitting here feeling sorry for himself? Or that he was open to the idea of male companionship? The thought disturbed him for reasons he couldn't precisely explain. He'd never been averse to having men in his bed, but he didn't exactly advertise that part of his sexuality. It wasn't a safe world to be gay or bisexual in these days. "You're very daring," he said at last, after thoughtful consideration. Or maybe men didn't need to worry about being pegged as queer when they were that fucking beautiful. That made Mal grin a bit ruefully. "Not as much as you'd think." He finished his drink and set the empty glass down on the bartop, trailing a fingertip along the wet rim. "Of course, if you've got better things to do, I can always go." Clay stared at him, his chest tightening. Was this guy for real? "And if I don't?" he asked as casually as he could, turning back to his own drink. It surprised him that it was nearly gone already. "Then we can go outside. Together." Mal was watching him again, a small smile playing over his lips. Together. Fuck. Clay wiped his damp palm over his thigh, wondering just what the hell was happening here. It had been a long time since he'd done the whole picked-up-in-a-bar routine. But really, what did he have to lose? A quick fuck would definitely do more to drown his sorrows than a glass of cheap beer. And it wasn't like he had anyone waiting for him at home, now was it? "Yeah," he said. He barely recognized his own voice. "I like the sound of that." He drained his glass and threw a few bills down on the bartop, then got up to follow Mal toward the door. The air outside the bar was bracing, cool without being uncomfortably chill. The low hum of traffic was subdued at this hour of the night, a pale flicker of headlights cutting through the darkness as a yellow taxi lumbered by. It was late enough that only a couple of people were visible at the other side of the street, looking a little like lost spirits wandering through the dark. "So," he said, a bit awkwardly. "I have a truck parked over there." A battered old pick-up that looked like it was being held together by duct tape and desperation, but hell. It was paid for. "We can head back to--" "No." The voice came from directly behind his ear, making him jump. Damn, this guy moved fast. Clay started to turn his head, but a hand on his waist stopped him. It was a light touch, but warm, even through his T-shirt and jeans. "What do you mean?" he said, clearing his throat nervously. He swore he could feel Mal's lips curl against the side of his ear. "We've got all the privacy we need right here." He gestured toward the pitch-dark mouth of an alley behind them, tucked away at the side of the bar. Clay glanced around a bit desperately, his chest tightening. He and Mal were already closer than he preferred to be seen standing in public with another man. "I...." "Come on, Clayton." Slow slide of a tongue over the side of his neck, hot breath curling into his ear. The fingers on his waist tightened, just slightly. "Let yourself live dangerously, for once." Clay closed his eyes. This was such a fucking bad idea. But his cock didn't seem to agree with him; the greedy thing was already straining inside his pants, eager to feel more of what Mal could do to it. "Mal... I...." He drew in a breath when Mal's tongue flickered into his ear, sharp little teeth biting down just slightly on the lobe. "Fuck. Yeah, okay." He couldn't believe he was doing this. He felt dizzy as Mal drew him into the alley. Some distant part of his brain buzzed with the knowledge that this was extremely dangerous; he didn't know anything about Mal, after all, other than the fact that he had a sexy face and a voice that lit fires under Clay's skin whenever he spoke. Neither trait was a guarantee that he wasn't out to rob him or worse, but really, Clay was finding it difficult to care much at the moment. The hand on his waist slid up to press between his shoulder blades, pushing him forward with gentle yet implacable pressure. Clay lifted his hands instinctively and felt the cold wall of the alley slide underneath his palms. He curled his fingers against it slowly, his heart pounding. "Mal...." "Shh." Mal's voice was little more than a sigh behind him, so soft he almost missed it. "Just close your eyes." Clay obeyed, trembling. It was too dark to see much of anything in here, anyway. Mal's fingers were moving at his waist now, loosening the buttons at his fly. "Shit," Clay breathed, dropping his head down against his chest. Unexpected or not, ill-advised or not, this was the sexiest damn thing that had happened to him in a good long time.