The Soul Forge (Sacred Guardian series #3) by J.A. Jaken Sequel to Through the Last Door and Eater of Dreams Novel (150,000 words) Genre(s): M/M Romance, Fantasy, Adventure The country of Kazure bows under the shadow of war as the Shindori lords from the east continue to wage their holy crusade. Kaori Sansa, the High Lord of Kazure, is desperately searching for a way to defend his people while he struggles to determine which of the lords in his own country can be trusted to see the war through. Meanwhile, Hunter confronts his inner demons as the horrors of his past come back to haunt him, and he comes face to face with the criminal organization that enslaved him as a child. Both men must fight to uphold their oaths—both to Kazure and to each other—while the forces gathering around them are doing everything in their power to bring them down. >> READ A FREE PREVIEW 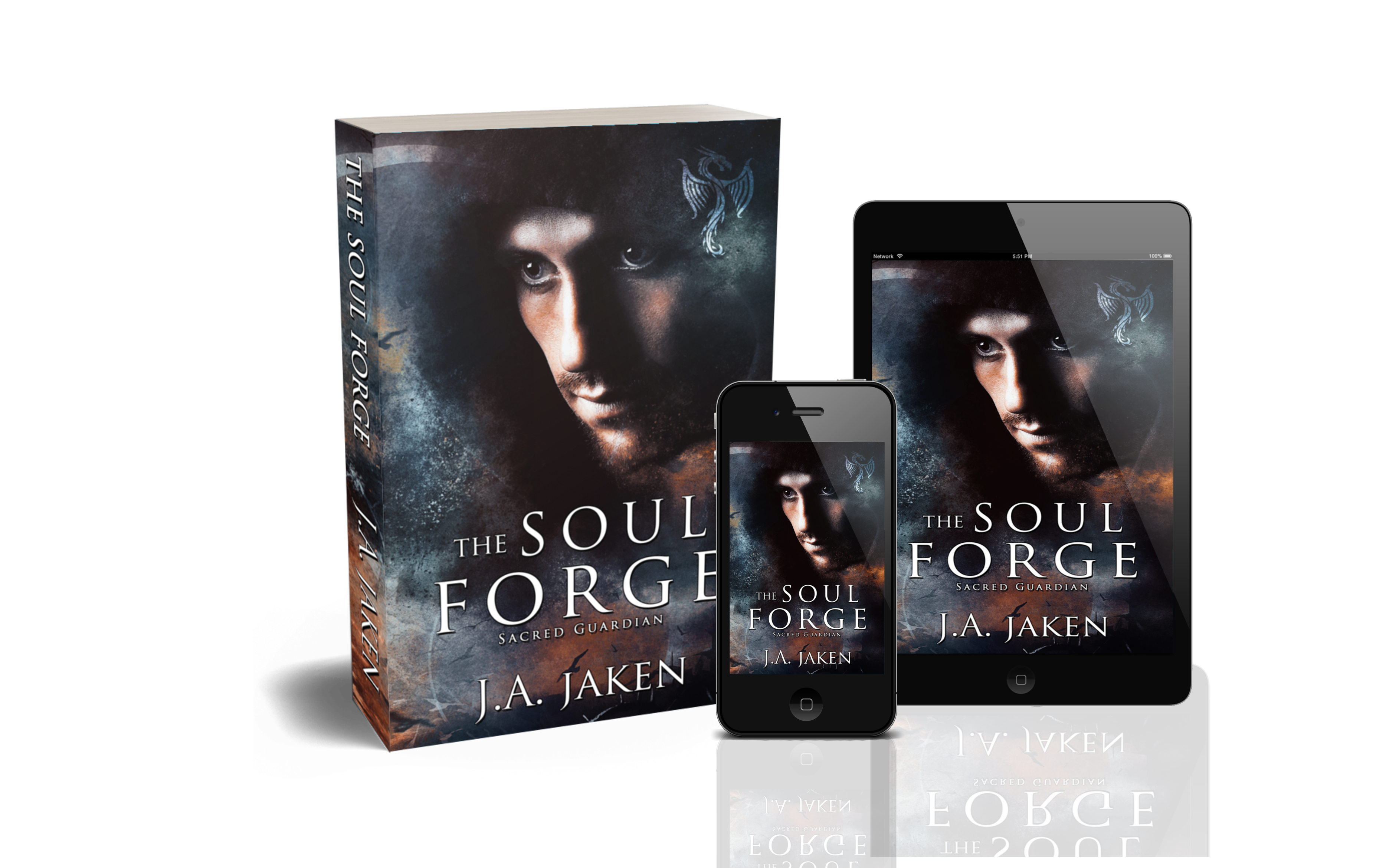 Here is an excerpt from The Soul Forge :

He didn't have any idea what Hunter was about to say, but he could tell from the look on the man's face that it was going to be difficult for him to hear. Hunter hesitated before replying.

"Removing the slavers from Kazure is important to you," he said after a moment's contemplation. Kaori got the impression he was deciding how best to frame his thoughts.

"You know it is," Kaori answered. "They destroy lives, Hunter. Entire families. You've seen the result of what they did to Rin and Malo. Hell, you lived through it yourself." He kept his voice even with an effort. "They have to be stopped."

Hunter nodded, as if he had been expecting this. "Our efforts to depose them thus far have been less than satisfactory."

"Don't you think I know that?" Kaori clenched his hands to keep them from shaking. His gaze moved to the fire that burned with such callous indifference inside the hearth, but it couldn't erase the image in his mind of small, broken bodies, draining out their life's blood into the snow.

"What if there was a way to take them down from the inside?"

It took Kaori a moment to understand what he was saying. "You're suggesting an undercover action of some kind."

"Yes." Hunter's face was very serious. "The slavers operate in an unknown number of cells scattered about the country, but they're far too organized to be independent of one another. If we can isolate the head of the organization and use that knowledge to identify their resources, their allies, their communication network—"

"We can cut them off at the knees." Kaori leaned forward in his chair, a slow thrum of excitement moving through him. "That's the kind of mission the Assassins Guild is best at, isn't it?"

Hunter hesitated. "It's true that the Guild trains its members extensively for this type of operation."

For some reason, a tingle of dread wormed its way through Kaori's enthusiasm. "But?" he prompted, knowing there was more that Hunter had to tell him.

Hunter looked as if he were steeling himself. "Of all of the Guild members you have at your disposal, I am the most logical choice for this assignment."

Kaori felt like he'd been slapped in the face. "No, Hunter."

"Kaori." Hunter's voice was patient. "You have dedicated yourself to expelling the slavers from inside Kazure's borders. Up until now, those efforts—while laudable—have not borne fruit. The few cells we have managed to eradicate will only be replaced with new ones in time; there is an endless supply of immoral miscreants waiting to take the place of the ones the Guard has killed or imprisoned. Their trade is lucrative, and to some that would be worth any risk."

The room before had felt too cold to Kaori; now it felt red hot, like a furnace had roared to life inside of him. "Your idea is a good one. But I don't understand why I can't send someone else to do it."

"Because I have inside knowledge of the slavers' organization that the other members of the Guild do not. I know the slavers' habits, their routines. I know the sorts of places they're drawn to, the kind of people they recruit and the steps they take to conceal their tracks and avoid Kazure's patrols. No one else has as great a chance of being successful at this."

It made sense, damn it. "It would be dangerous."

"I promise you I will be exceedingly careful."

Kaori felt as if he had forgotten how to breathe. "I can't lose you, Hunter."

"I'm asking you to have faith in me." Hunter's gaze was very serious. "Let me do this for you, Kaori."

Nothing hurt Hunter so deeply as the knowledge of Kaori's pain. He knew Kaori had been wounded deeply by this latest tragedy, and this was his way of trying to ease it.

Kaori shook his head. "You don't need to do this for me."

"Then allow me to have a selfish motive." The words made Kaori look up at him in surprise; there had been a touch of steel buried behind them. "The deaths of these children has hurt me as much as it hurts you. Slavers care nothing for the lives they ruin; believe me, I saw enough children die while I was in the pits, many of them younger than Rin. The children I knew were resigned to meet an early end. Some of them found it a relief when they did."

Kaori's mouth felt dry. Hunter rarely spoke about the time he had spent among the slavers as a child. Kaori knew the experience had been traumatic for him, and that he carried the scars of it even now. Was it so inconceivable that he might want vengeance against his captors for the torment they'd put him through? If he had an opportunity to wound them now, or possibly to bring their entire empire crashing down, did Kaori really have the right to stop him?

"Can you do it?" Kaori asked. "Can you really work your way into their organization and bring them down?"

A ghost of a smile crossed Hunter's face, making Kaori shiver. "Yes. I can do it."

Kaori had to agree with him. He had an intimate familiarity with Hunter's abilities after years of being safeguarded by him, both as a child and as an adult. Hunter's skills were such that he had been named a commander in the Assassins Guild despite his relatively young age, because no one else there could match him. Physically, he was a powerful and lethally cunning fighter, comparable to none. But he also excelled at the other skills the Guild prized: stealth, intelligence, ingenuity, resourcefulness. He was also exceedingly honest about the extent of his own abilities; if he said this was something he could successfully do, then Kaori was inclined to believe him.

It was a long while before Kaori could bring himself to speak. Hunter sat patiently and waited him out, as if he knew full well what decision his lover was going to make.

"All right," Kaori whispered, staring down at his hands. "Let's do this."