Through the Last Door (Sacred Guardian series #1) by J.A. Jaken Novel (135,000 words) Genre(s): Fantasy, Romance, M/M When Kaori Sansa's father dies, he is forced to return home to claim the throne as the rightful heir of the country of Kazure. In the aftermath of his father's death, he learns that the country he loves is riddled with corruption, and is hovering on the brink of war. Will he be able to hold the kingdom together despite the odds that are stacked against it, and somehow unlock the buried powers of Shinja, the Sacred Beast of Kazure? >> READ A FREE PREVIEW 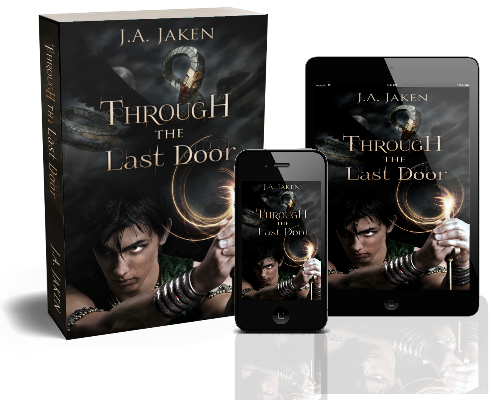 Kaori and Hunter's adventures are continued in Eater of Dreams (Sacred Guardian series #2).

"All you fantasy lovers out there are about to get a true treat when you crack open this book, you will be transported to an incredible world that has a feel of feudal Japan and incredible characters who draw you into a journey that will have you gripped from the first chapter."

"My review is really quite simple; I LOVED THIS BOOK. It is a story that will stay with me for quite some time."

"The plot never gets tired and keeps the excitement and momentum building. [...] I totally recommend this book. I feel blessed to have read it."

-Fangirl Moments and My Two Cents

"It was a delightful gem that ensnared me from the first page. This is an excellent book that I would highly recommend whether you like fantasy, or adventure, or a bit of intrigue. If the author ever writes a sequel, I will be first in line to buy a copy."

"I was riveted to the story so much so I didn’t want to stop reading. If you want a good story with a brilliant plot this will be perfect for you."

"J.A. Jaken has written a wonderful coming of age story here. Kaori's journey from young man to King is told with intricate characters and beautiful artistry. A Five Star read!"

"You just have to buckle up for this journey, because that is what it is. Forget sleep, work, and other such trivial things and just… enjoy!"

Here is an excerpt from Through the Last Door :